I’ve been obsessively hitting refresh on Sarah Thomas’ 4x English Channel attempt all day long. As of right now, she’s so close to the end, but the current is clearly pushing her past Dover Harbor, and they’ve adjusted her projected trajectory. It was 5km to go, now it’s 8. The drama!

I have to sit back and marvel at her. In a strange way, I identify with her. It’s easy when someone does something seemingly super human to immediately distance ourselves from them. She’s crazy, she’s a freak, she’s one in a million. While she may be these things, by pointing to the difference between her an “normal” people, we assume we are not capable. She’s swimming the “impossible”.

Isn’t it interesting how once someone breaks a world record or successfully attempts a new big challenge, a bunch of other people do it too? It’s all about seeing yourself in that person. What did they do to get there, could I do that too?

I see myself in Sarah Thomas not because I think I could swim the English Channel four times, but because … I’m starting to believe. Something shook loose in me, something changed. I suddenly am wondering what it would be like to take on something of that magnitude. Could I? 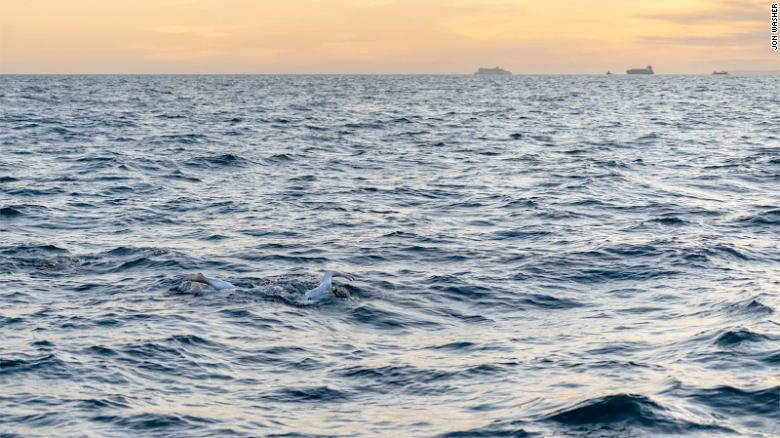 Sarah Thomas on her 4x crossing, image stolen from cnn

I have to sit back and wonder what makes someone think they can do something no one else has done? I crewed for Cindy’s swim around Sauvie Island, which had never been attempted before. What makes her think she can do that? How dare we dream so big?

When I think about taking on something that seems impossibly out of reach, I instantly hesitate. What will others think of me? By committing to such a goal, it shows just how much ego I have! That I think I could do that! When I think back on various quotes about not dreaming small etc, I think I finally get what they mean. Dreaming big is about risking my ego in a very public way—the risk that others will see me as full of myself for even thinking I can do a thing, but also if I give it my all and don’t make it, what then? Or even worse, declaring a huge goal and then self sabotaging the work to get there.

It’s not so much about the end goal that I feel worried about, it’s the day to day. Can I make that commitment to work towards that thing? Can I work, day in and day out, with a single-minded determination, to do the thing? To do all the things around the thing? For instance, a huge swim goal isn’t just about swimming. It’s about getting good nutrition, sleeping, doing PT (ugggh), endlessly working on form, giving up all one’s social life and other adventures and activities to swim, etc. 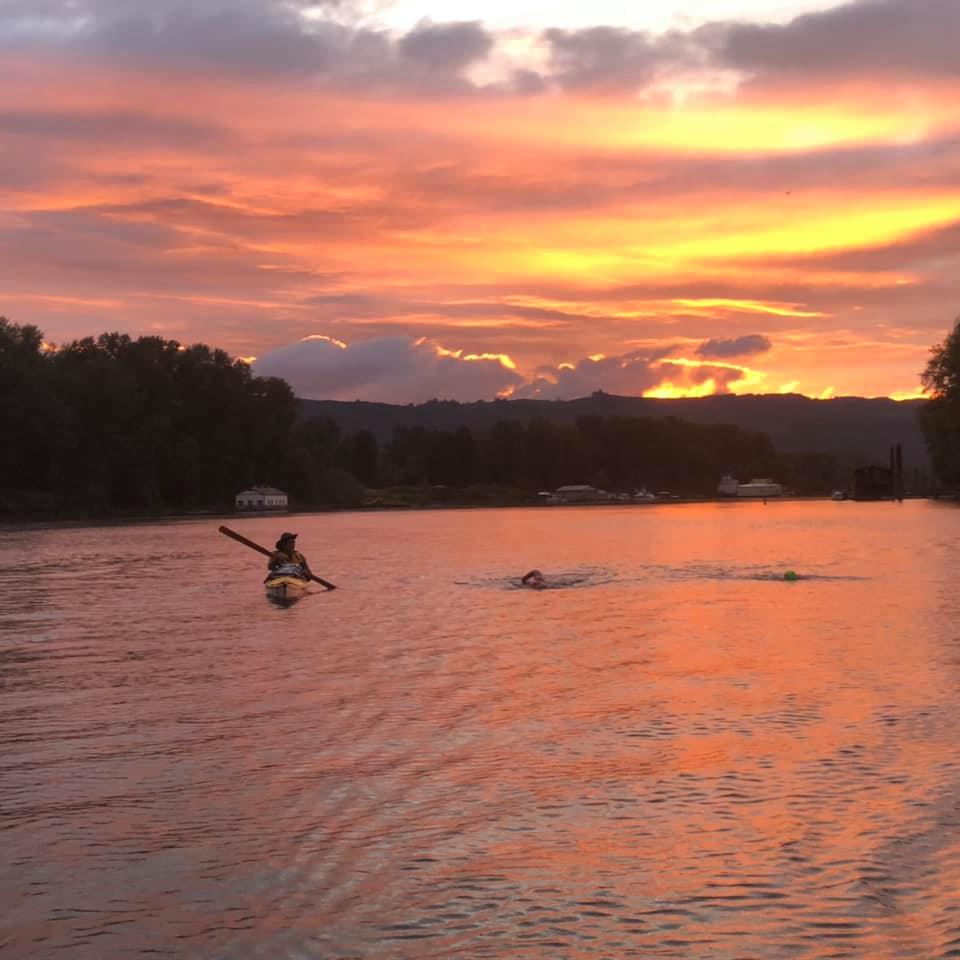 Well, life would be as it is now, where I watch other people do amazing things and am left feeling like it could have been me. Why am I not doing that? Not that I want to do the exact same thing, not that I want all the attention (okay maybe some of the attention), but it’s more a feeling of directionless. I know I’m unhappy with my lack of big dreams, but I haven’t yet developed the courage/determination/confidence to actually admit them to myself, much less anyone else.

Obviously, Sarah Thomas didn’t go from a 9 mile swim to a 130 mile swim in a single year, she bit off smaller challenges that led to this one, each year, committing to a goal bigger than the last. I suppose that makes it feel less insane, as there is a progression year over year that might not be apparent looking in from the outside. I wonder—did she see herself doing something like this early on? Or was it just the natural extension of what she had already achieved?

I don’t have any particular goal in mind, in fact the “goals” part of my bullet journal is conspicuously empty. Setting a goal is making a commitment, and, well, commitments are tough and not to be taken lightly. I struggle between wanting to narrowly focus on Something Big, but also wanting to have my weekends free to adventure, mountain bike, backpack, and just jump in some alpine lakes. At the same time, I know I need direction to be happy, and the positive rewards of intentionally funneling all time and energy towards a goal makes me happy, as long as I get breaks to slow down and look around from time to time.

OK, so what’s next? I don’t know, but I’ll leave you with this terrible photo of a book that I have reread a few times now called Keep Going: 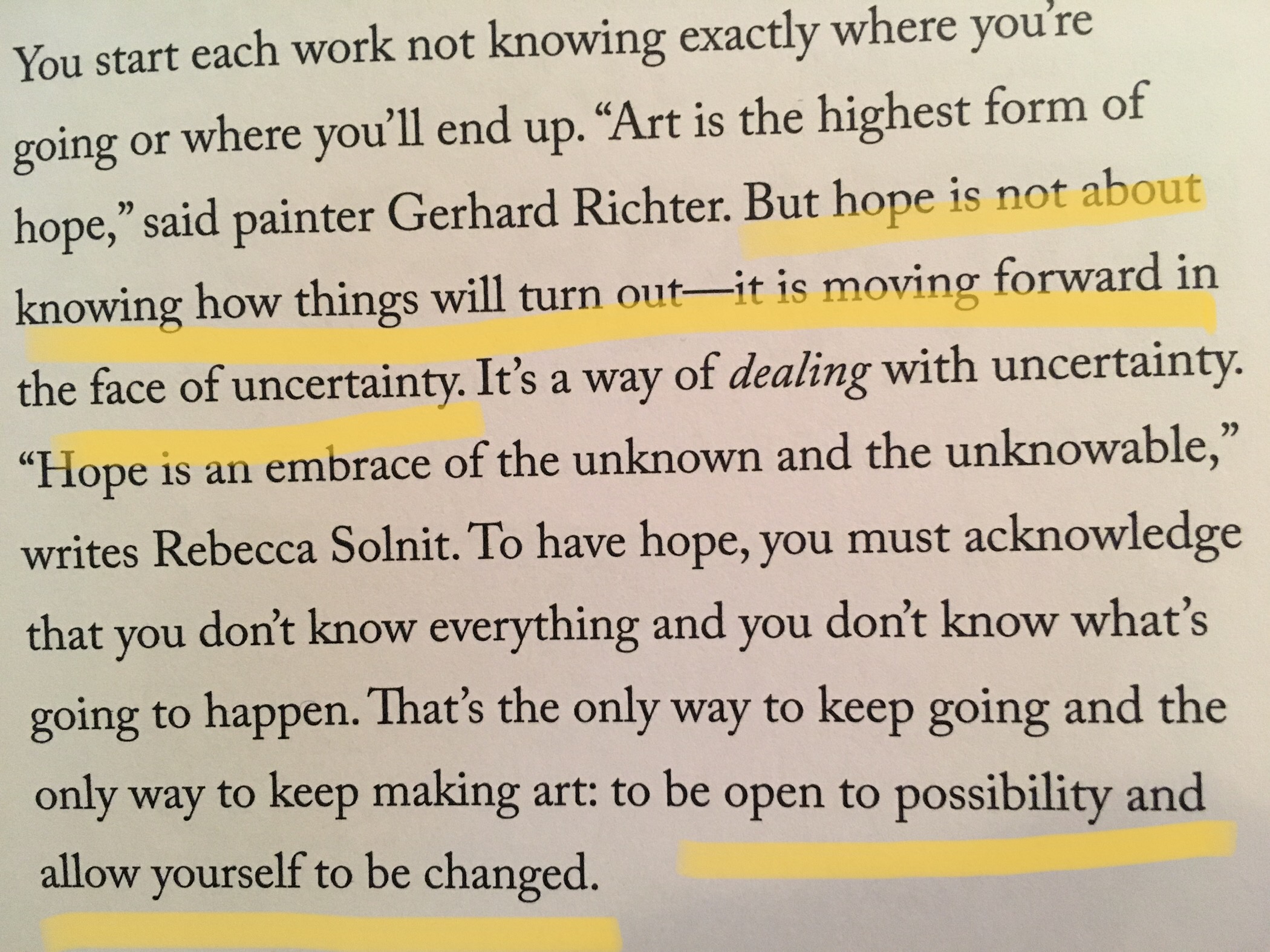