When I looked out at Lac Massawippi from the shore, the wind pushing the water away from us, I felt calm. I had 9 miles of swimming ahead of me, which was 3 miles longer than my longest swim to date, but I felt ready. I only had to swim 30 minutes, then swim another 30, and on and on until I touched the rock wall at the other end. One stroke, and then another.

My trip to Vermont for NEK week was my first organized marathon swim event. I chose it because I’ve never been to New England, and if I’m going to travel that far, I’d prefer it to be for a multi-day event. I heard it was small, casual, and about the joy of swimming; I wanted to explore different lakes, meet people, and figure out if marathon swimming is for me.

While the event was 9 days, I only signed up for 4 of them. I didn’t want to get in over my head, and I wanted to give DJ a chance to swim as well if he wanted. We stayed in Newport at a house up near the church overlooking Lake Memphremagog. The countryside was endless rolling hills, dotted with farms and lakes. It felt like the rural areas of Washington/Yamhill counties. I loved it, and spent a great deal of time checking real estate listings, as per usual when I travel. Despite my total lack of experience in snow sports, I decided I could move there and take up cross country skiing and fat biking, and dust off my old snowboard. Ice swimming is a given, of course.

My first swim was Island Pond, which greeted us with strong winds, as did most afternoons we were there. The water felt warm, and it was a great 4 mile shake out swim. The wind pushed us to our half way point, and I didn’t have trouble swimming into the wind. However, DJ, on the paddle board, could not stop to give me feeds, because the wind would whip him right around and push him back to the other shore. I didn’t really need feeds for a 2 hour swim, so I waved him off and we finished without much trouble.

I was pleased to see I didn’t finish completely alone, there were a few other swimmers around my same speed. I was nervous coming into this event that I would be all alone in the back of each swim, but it turned out not to be the case at all.

We had to wake up very early the next morning to make our way across the Canadian border to Massawippi. I felt calm; long endurance events don’t tend to make me nearly as nervous as something like a cyclocross race, which depends on the ability to sprint off the start line and be  on the edge of puking for 45 minutes. Endurance events allow me to warm up gradually while on course, which typically takes about an hour, and then just meditate on form and gratitude. It also allows plenty of time for weird rumination and obsessive worries to dominate and destroy any joy of an event. Thankfully I am well practiced in shitty obsessive thinking, since I’ve been doing ultra long endurance events for the last 14 or so years. Having a clear, focused mind is makes the difference between loving or hating an endurance event.

For me, it’s far easier to end up in a negative thought spiral while swimming; mountain biking requires deep concentration on your surroundings at all times (or you will end up flying off your bike, which I know from experience). Swimming is like being in a deprivation chamber for hours, unless you happen to be swimming in shallow tropical waters over a coral reef or something, which Canadians lakes certainly are not. 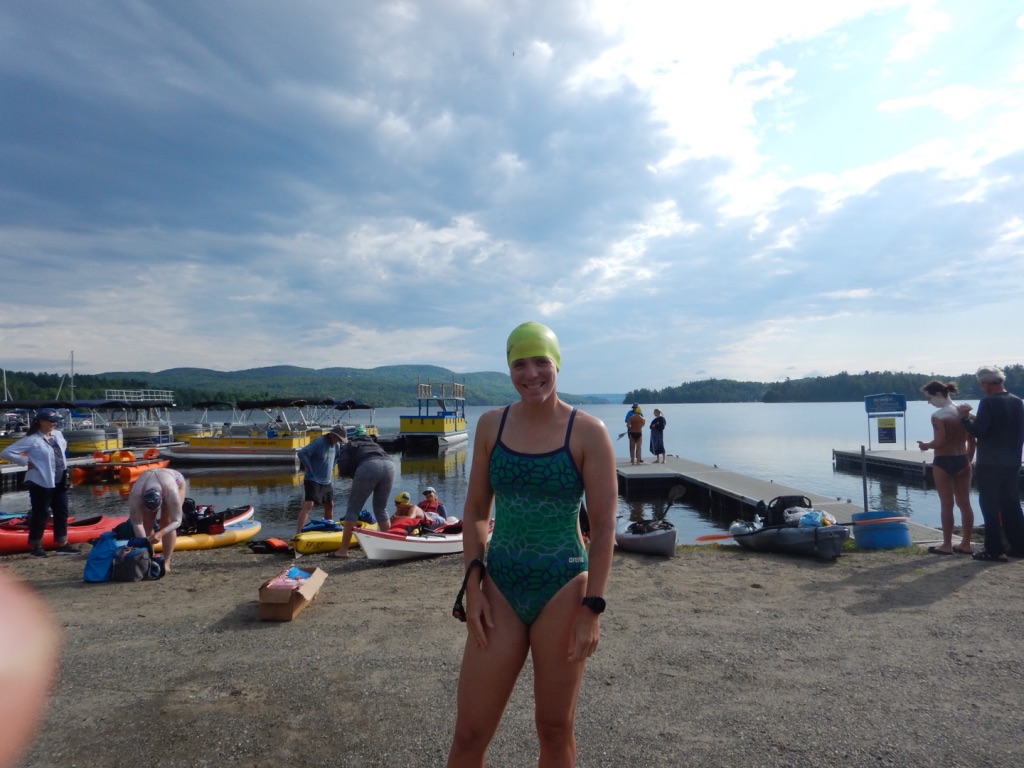 I point all this out because I had had some fairly negative long swims, and I really wanted to enjoy myself for this event. So off we went. The water felt cooler than the day before, and I was actually a bit chilly for a while. I projected 6 hours for the swim, but the wind was pushing us nicely, so we were going at a good clip for the first couple of hours. I thought for a while that I was alone, but eventually I realized there were about 4 swimmers right around me, which was nice.

At some point either the geography or the wind shifted, and we were being hit with a cross wind. I kept swimming away from DJ, and he was having more trouble controlling the paddleboard. The waves were pretty large, although they didn’t really bother me. He eventually realized he should paddle on the other side of me, so he didn’t have to wave at me to get closer so often. I breathe bilaterally, so it doesn’t really matter which side he’s on. 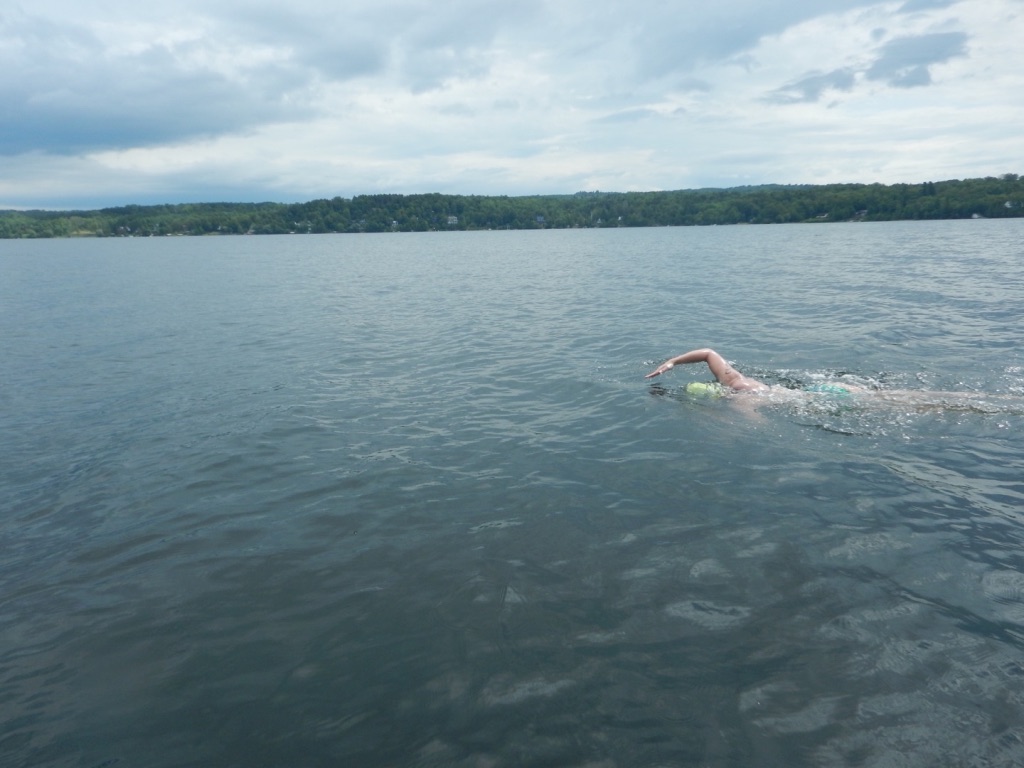 While I was downright zen-like in my thoughts (I thought about my form for about 90% of the time, and thought about gratitude the other 10%), I was not so great with my feed prep. Before we left for Vermont, I found some heed packets in the cupboard which I had never used, and thought “great, I’ll use these every other feed, so I don’t get sick of my maple syrup concoction”. Well that was all well and good until I was in the water, taking my first heed feed. I took a swig and it tasted like… water. Water that had perhaps been lightly dusted with heed. This was supposed to be nutrition that got me through 6 hours of swimming, so I needed a solid amount of calories every time. Did I look at how many calories was in that packet? No, no I did not. Thankfully I had packed some back up gels, so I had those with the water-heed. Later that evening I looked at the packet: it contained a measly 100 calories. Major fail.

We were way ahead of schedule, which turned out to be my saving grace. Did I sit down and think about how many feeds I might need for 6 hours of swimming? Nope. I just mixed up 4 random bottles, threw a handful of gels in the bag, and called it good. Have I mentioned I’ve been doing endurance events for 14 years?

5 hours in we realized I had one single feed left. However, we were on the final mile of the swim, so I didn’t actually need it. Had the wind gone the other way, I would likely have completely run out of nutrition and been completely screwed. Lesson learned? Hopefully!

The last half mile I suddenly felt a very painful twinge in my right bicep during my pull. We knew the finish was by a “white gazebo” but there were like 5 white gazebos near the finish so I kept stopping and asking where the hell we were going. My arm was in pain and I was annoyed at not being able to tell where we were going. But eventually we got there, and I touched the wall. 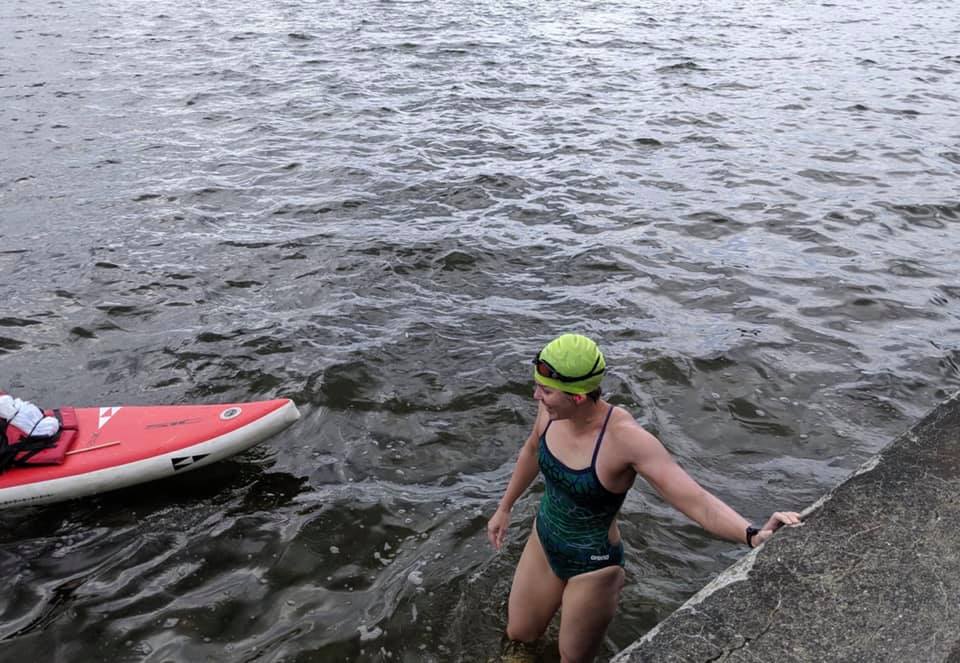 I had the next day off, which was good because I could barely move my arm. DJ worked on it a bit, but I was not feeling great about swimming two more days. We drove out to Lake Willoughby, since we were not participating in the two national USMS races that were there. DJ swam out and I paddled; we got a nice easy tailwind. I loved actually getting to do some sightseeing on the water instead of just staring at the water. I realized the wind was picking up, so when we traded places, I said we should head back. I only swam for about 30 minutes since it was just supposed to be an easy recovery swim, but honestly it just felt so good to be in the water I didn’t want to get out. DJ had to tell me to get out. I sat on the back of the paddle board in my swim suit, and DJ paddled into a fierce headwind all the way back. I was freezing, but grateful that we both fit on the thing. While paddle boards aren’t great in the wind, they are easy to get on and off in the middle of a lake! 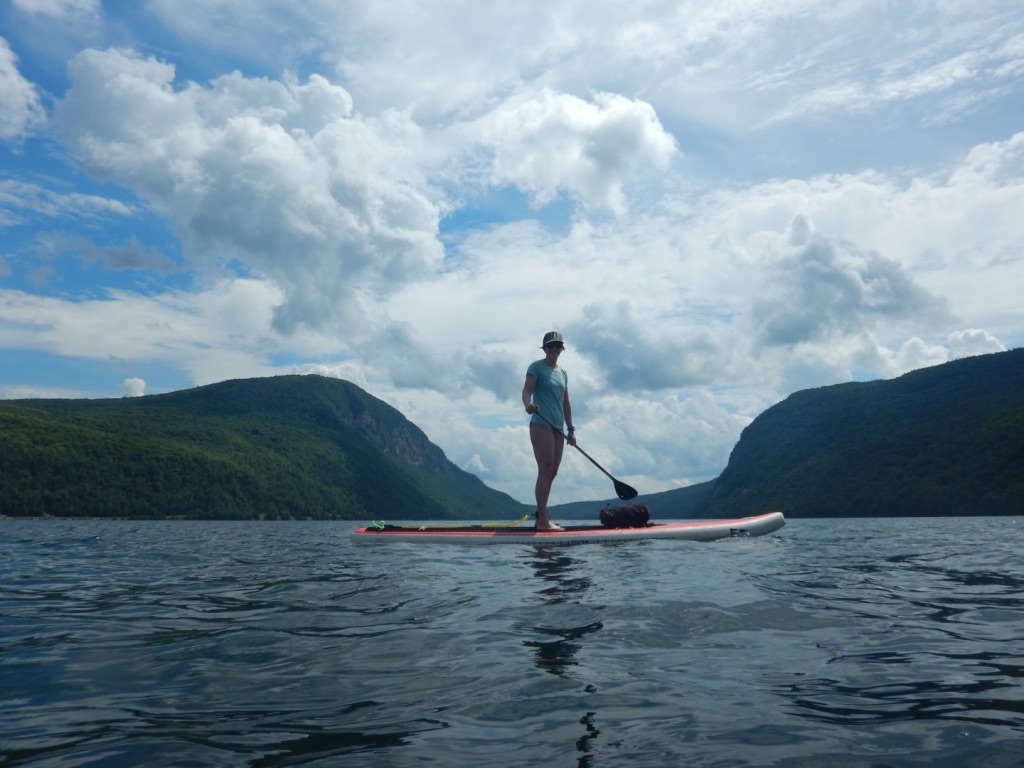 The next swim was a circumnavigation of Echo Lake, with the option the swim it twice. I took the 6K option, and actually felt pretty good up until the last 500 meters or so. I had to slow way down and barely pull to make it in. The lake itself was clear and serene, and I enjoyed having to hike down a trail to access the lake. But my biceps felt ripped to shreds. I could barely lift my arms up. I really wanted to swim Lake Memphremagog the next day, which was another marathon distance at 6.2 miles. But we came to the conclusion the next morning that it just wouldn’t be wise. So I asked DJ if he wanted swim while I paddled. So the morning of the swim, he took a few minutes to think about it, and then said yes. He had somewhat recently done his longest swim ever—6 miles, in a wet suit. So this would be a similar distance, but without a wetsuit, and he hadn’t exactly been training for it, having paddled most of my long swims. 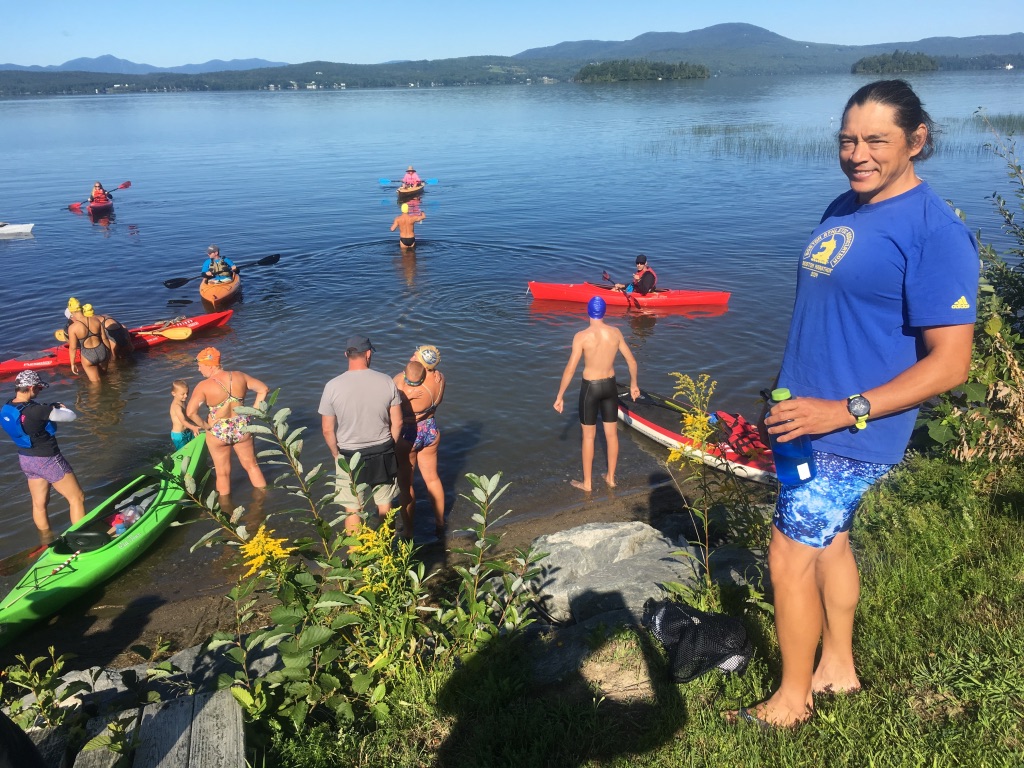 DJ before getting in the water at Memphremagog

The day was calm and sunny, and the wind never picked up, which I hear is quite rare. We went around a couple of small islands into Canadian waters, and it was interesting to be able to see the cut of the trees were the US/Canadian border lie. We heard we were not supposed to step foot on the Canadian shores, I wondered if there were secret border patrol boats hanging out watching us. There was one tiny tip of one island which was US land, I wondered what it would be like to live on such a sliver of your own country.

DJ did great, and held a steady pace the whole swim. We were right with another swimmer, with whom I had finished Massawippi, so it was fun to pace with another, especially since we were both very confused about where we were going on the way back. It’s amazing how different everything looks on the water. I didn’t bring my binoculars since I was going to be the one swimming, and I was sorely missing them.

That was the last event I had signed up for, so the next day we drove to Montreal and did some sight seeing, and then on our last day, bagged two lakes I hadn’t yet seen (Seymour and Crystal), just so I could check them out and feel the water, although I wasn’t in good shape to swim very far.

Would I do this event again? Yes! But next time, I would want to swim every day and do the longest swims (except the double Massawippi, I’ll leave that to the long time marathoners).