The day after my Swimapalooza, I jumped back in the water, but this time to support other swimmers driving down from Seattle to do a relay in the Portland Bridge Swim, so I was on the water for another 5.5 hours. This was my first time doing solo swim support for a swimmer for that length of time, so I learned a few key lessons.

As I noted in my previous post, as a swimmer it can be hard not to run into the paddler if you don’t swim in a perfectly straight line and the boat isn’t going in a perfectly straight line (let’s be honest, it’s on the water, no one is going perfectly straight). Well, it’s also hard as the yakker not to hit the swimmer with the paddle, but at the same time hold your line when they start to swim into you. It’s the paddler’s job to navigate, and I found it tough not to slowly veer further and further into the center of the river, despite being reminded by race volunteers a few times to swim closer to shore. I just let the swimmers run into me a few times, which I guess is what the paddler is suppose to do. It did make me question how well I was paddling, but in general I was attempting to point the boat at something to keep it in some kind of straight line. I also had binoculars which came in very handy in choosing the best line, as I don’t have prescription sun glasses (shh don’t tell people I should probably wear my glasses all the time…).

It’s very difficult to both paddle and do literally anything else, so taking pictures, getting feeds ready, eating, etc, becomes very challenging without basically losing the swimmer. One of my swimmer’s feed bottles was not tight so I spilled sugar water all over myself near the beginning. I also struggled to figure out how to leash the thing as it seemed the carabiner did not fit on the bottle, so figuring that out beforehand would have been ideal.

I did manage to take lots of pictures, but I did not manage to pee, despite sitting on a sponge and literally thinking about waterfalls and warm liquids for hours. At one point we passed a large container ship that was emptying water out of various spouts and damn did I STARE at that water. But no. Bladder was not giving up the ghost. It finally became a critical issue near the second transition point, and I waved down a support person to escort my swimmer while I made a mad dash for the shore. The bathroom was no where in sight so I just ran my kayak onto the beach and jumped into the water to let er rip. 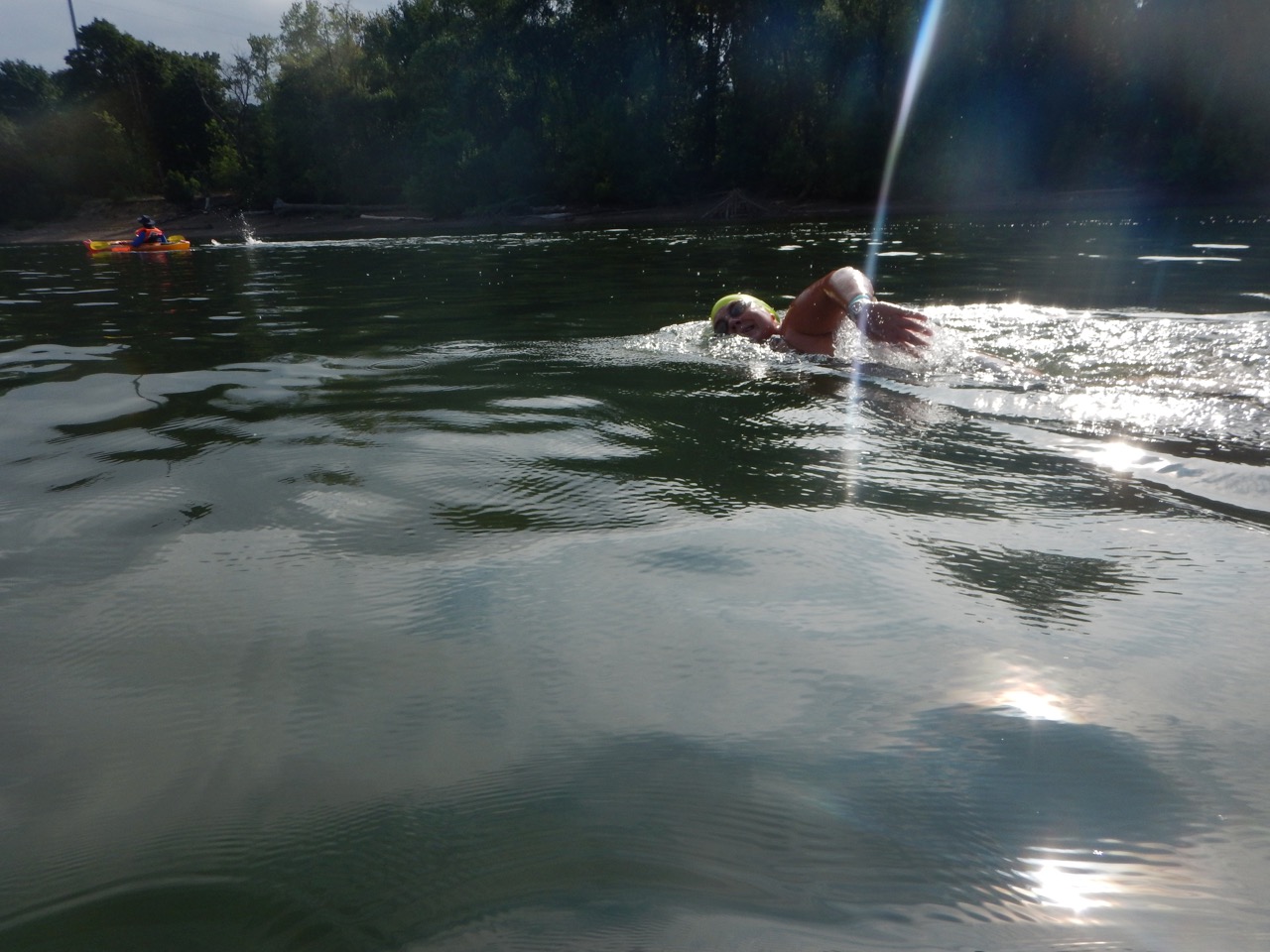 Look at the artistic photos I take as a PRO yakker

The rental kayak, while seemingly comfortable, almost instantly made my hip and back hurt very badly. I’m guessing my hip was tight from the day before and being stuck in that position only made it worse. It was fairly torturous. I think from here on out I will stick to my paddleboard for swimmer support, or a sit on top kayak that offers more sitting positions/peeing opportunities.

3 days later, I was on the night crew for Cindy’s attempt to swim around Sauvie Island. I started my kayak shift around 9pm and paddled until 2am. General thoughts on supporting a swimmer at night:

The lights on the kayak and the lights on the swimmer were all the same color, which made it impossible for the support swimmer (who was positioned on the other side of Cindy) could not differentiate between Cindy and the boat, so she kept running into her. Ideally all crafts and swimmers are illuminated in different colors.

We had a feedbag that sat on top of the kayak which was great. There was a green glow stick inside to help see what you were grabbing, as each bottle was a different color. However, the green light made everything look the same. I thankfully thought to bring my headlamp, which was critical. However, I wanted to use it in red mode so I wouldn’t destroy my night vision–but that was the same problem. All the colors looked the same. Ideally there would be either some other way of telling the bottles apart, or a very dim white light.

Cindy also had a hard time seeing the bottle; I think again, a glow stick that is a different color from the ones on the boat that is tied to the feed line would make it easier to signal to the swimmer that it’s feed time, and then make it easier for her to see the bottle itself.

The place where I started paddling also had many pylons (“dead heads”) in the water which were essentially impossible to see as soon as it was dark. Thankfully someone on the sailboat had a very bright light they could shine out on them, but we were pretty close to a few of them. It just so happened that I had gotten a ride to the sailboat from a our support powerboat further up stream, so I had just gone through that part of the channel before nightfall and noted all the pylons ahead of time. Had I not done that, I think we would have had some closer calls.

I also discovered just how disorienting lights and darkness can be; there was a point when I had no idea where we were in the confluence of the channel, the Willamette River and the Columbia River. They kept trying to direct me to the left, but I thought we were just going to go right into some industrial land, I was so confused. I was looking straight ahead, and I originally thought I was looking across at the Washington side of the Columbia, but someone said I wasn’t; then it turned out I was. I realized I was so focused on looking straight ahead, that I didn’t see a big black river to my left opening up as we circled the island. Whoops. And I would like to add I DID wear my glasses kayaking, as I am essentially night blind without them. Even still I found it confusing and disorienting, and it would have been a good idea for me to paddle the area in the daylight first and studied some maps.

Finally, I don’t actually know how to kayak, so when I had to maneuver the thing sideways, I literally had no idea how to do this, and had to do lots of weird moving back and forth motions to position the kayak up against the sailboat at the end of my shift. So perhaps learning to paddle would be useful. Anita yelled at me, “do you know how to scull?” me: “like the swimming drill?” so yeah. Whatever that is, I should learn that.

One thing I was very nervous about when I offered to paddle at various cold water swims over the last year was my complete lack of life guarding/CPR skills. Should I know how to save someone if something happens? Is that a safety paddler’s job? I took an online course in lifeguarding, which really just made me realize how little I could actually do.

Let’s be honest: if you are in a kayak and something happens, there’s almost nothing you can do other then offer the swimmer the option of holding onto the boat or calling 911, assuming you brought your phone on board and have access to it. If a swimmer is unconscious or unable to grab the boat, you can blow your whistle to get other swimmers’ attention (you have a whistle right?), but you would _not _attempt some sort of water rescue yourself, unless you happened to be a lifeguard and have the appropriate lifeguarding equipment on hand.

A paddler’s role is to help spot boats, help boats spot you and the swimmer(s), give out feeds, navigate, and take excellent photos. But it is not to save anyone from drowning. That is not necessarily something I knew going in, but I think something worth while to tell new paddlers.

All in all, when I think about the hundreds of events I’ve done, be it cycling, triathlon, swimming or whatever, I have to stop and think about all the volunteers that make those things happen. We all do our hearty clap for the volunteers when the race director gives them a shout out, but how often do you actually skip a day of racing or training yourself to lend a hand? While I’ve volunteered at many events and continue to do so, I  I could certainly do a lot more to give back to the communities that have given so much to me, through volunteering, supporting, or even, dare I say it, organizing something myself!? Who knows.