My brother lives a short 10 minute drive to a gigantic lake, so clearly I needed to get some swimming in while on a holiday visit. The forecast calls for rain tonight, so it was today or not at all.

The second we decided to head down there, I instantly started feeling nervous. It felt like it had been forever since I was in the cold water, although I am no longer afraid I’ll lose my acclimation after missing a week. It just makes me nervous for no reason at all.

When we got to the beach, we had to go down a few flights of stairs to get from the parking lot to the beach, and from above I could see the large swells crashing into the breakers.  Not really what I was expecting for a lake. My brother said he had never seen it like that. Great. We made our way down and his kids set up shop to dig holes in the sand.

I stared at the waves crash for a while, wondering if I should get in. There was a danger sign at the top of the stairs for rip currents, although the breakers probably kept them at bay. Although if I actually wanted to swim I would have to swim out past the breakers to get past the surf. I didn’t have my float, and I wasn’t with anyone who would be able to get into the water without going into shock.

After a lot of hemming and hawing I finally took the temperature of the water; I thought it would be low 40’s according to some temperature readings I found online. The thermometer went down…down…and finally down to 36.5. Gulp. So far my coldest swim was 39.

At some point I got tired of staring at the surf so I just starting putting my earplugs in, my cap on, my goggles on. I decided I would at least meet our definition of a “swim” by 1) putting my head under water and 2) taking some strokes. I walked in without much fuss, although the large waves made the slow entry somewhat impossible. Pretty quickly I was diving under the surf and laughing. It was fun. Honestly I wanted to stay in longer and get out past the breakers, but given all the circumstances, I stuck to my plan and pretty much came right back. 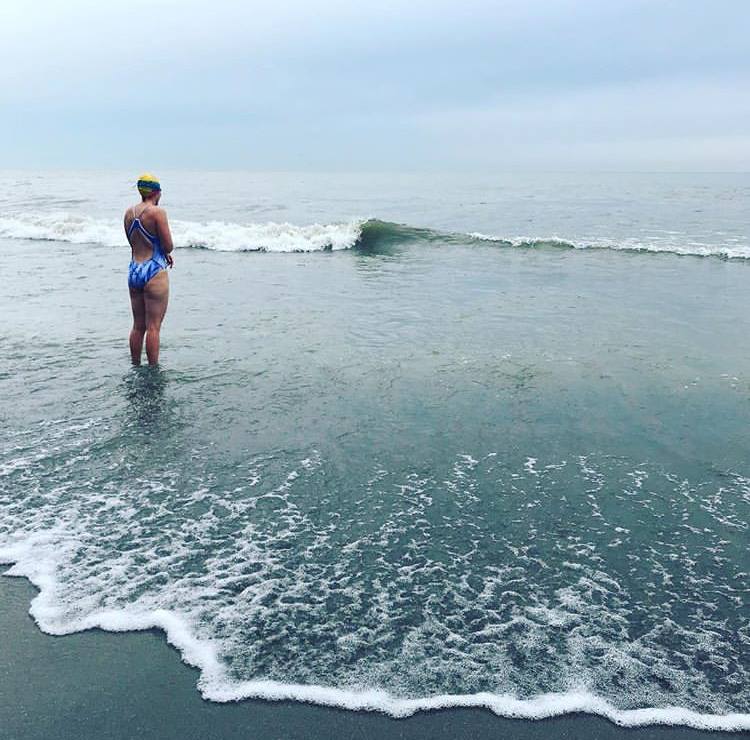 I was definitely cold for a while, but with normal person shivers. I noticed as I was toweling off that my knees were purple, which I have never seen before. My feet were painfully numb for a long time, and it took a hot shower to revive them completely. To be fair, my feet and lower half were in the water longer then a minute, since it took a while for me to start my watch.