Race day certainly had a different start then any I’ve ever had. For the first time on a race day morning, for both for me and for DJ, neither of our alarms went off.

We were supposed to be in the lobby ready to leave at 5am for the 6am race start. DJ startled me out of sleep at 5:05am.

This is why you lay all your shit out the night before. We were dressed and in the car at 5:15am. Instead of my normal leisurely coffee and oatmeal, I stuffed a banana and a Larabar in my face and grabbed some coffee in the hotel lobby to go. Instead of spending some time warming up and stretching out in my room, I stretched in the (very long) porta-pottie line after dropping off my gear.

The benefit was that I never got nervous for the race, since I was fairly surprised to find myself at the race at all. It was a sunny, gorgeous morning and a rolling start, which made it easy to walk over 5 minutes before the start and find a good place to stand.

A rolling starts basically means that you group yourself in with the approximate swim time you very optimistically aim to have and everyone gets in the water mostly one at a time, your race time starting as you enter the water. It makes the swim really relaxed since you don’t so much have people swimming over the top of you. On the other hand, it makes the rest of the race less of a race and more of a personal time trial, since you have no clue if the people around you are beating you or not, which really sucks and pretty much takes all the fun out of it. But more on that some other time. 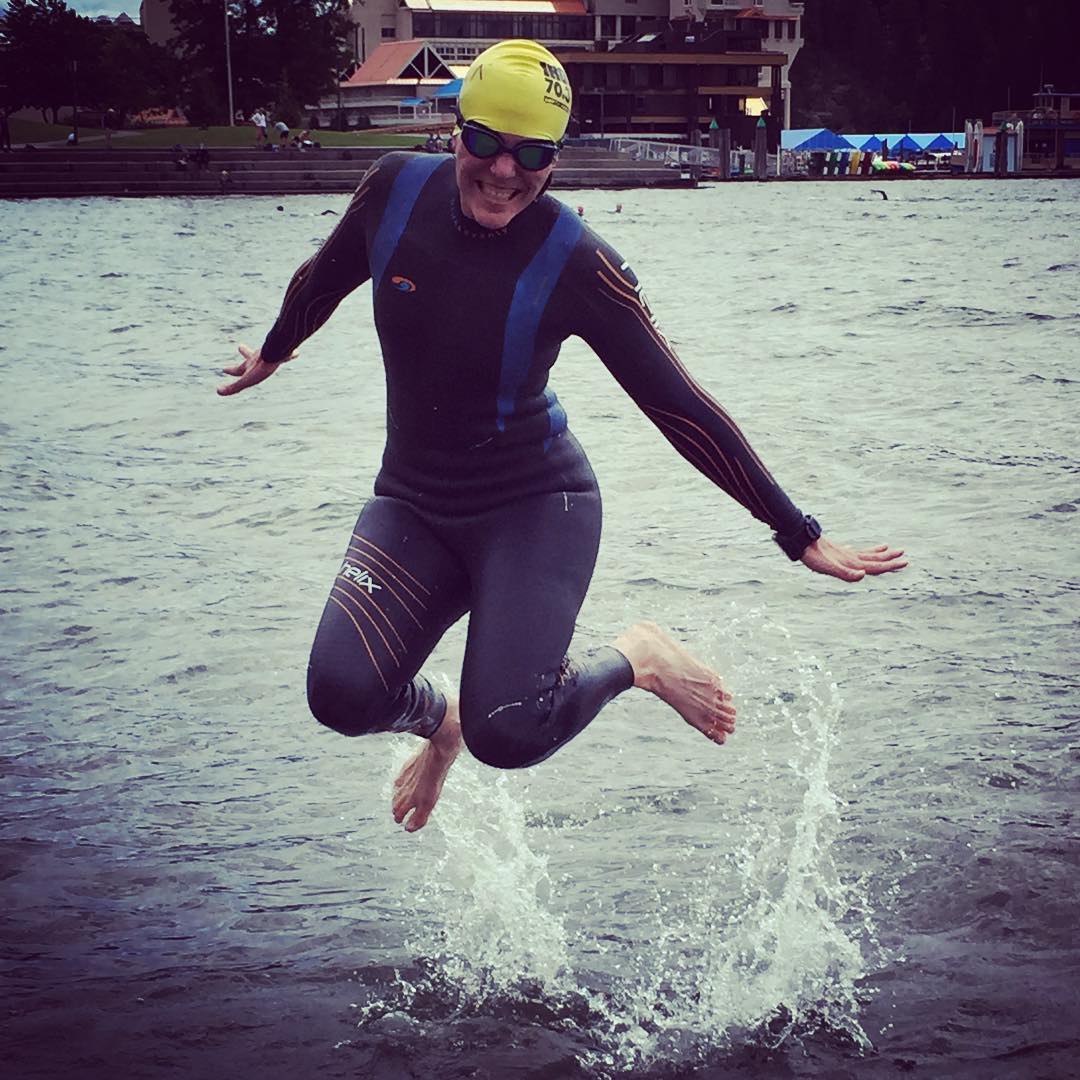 So ready to race! Warming up the day before

The swim was a bit blinding, as the sun was just hitting the water. At the turn around, I couldn’t see the buoys at all and just went on blind faith of the people in front of me. I also managed to actually take my motion sickness meds instead of leaving them in my bra like last time, so I had no issues with dizziness.

The bike portion was truly the highlight; I had my new bike fit properly and I rented some Zipp 404 wheels, and I flew. I admit it was fun to blow by person after person like they were standing still. Some dude said something like “you should find yourself a new Shiv” (which is the model of my bike…I guess because I got the cheapest one?), although I was going by him so fast I couldn’t really be sure exactly what he said. So there.

The run didn’t go as well as I had hoped, and despite the much easier run course, my time wasn’t much improved from St. George (2 minutes faster). I didn’t have it in me to kick it up a notch and the end, I was just trying to finish without walking the last four miles. 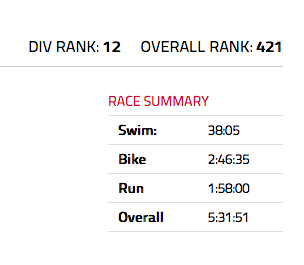 In the end, I finished in 12th; so close to top 10 I can taste it! I also took 30 minutes off my previous time, which I feel pretty good about. Currently I am 66th in the world for my age group in 70.3, which will continue to drop unless I do another race. At this point, the only two races I could do without jumping on a plane would be Whistler or Santa Cruz. I would love to do Whistler, but I don’t think it’s in the cards unless I basically took the last half of July off from work.

So instead, I plan on racing the full enchilada in Coeur d’Alene in August (!). So pray for my knees, they’ll need all the help they can get.