The story of St George begins the evening before we hit the road, when DJ and I drove out to Hagg Lake to take part in an open water swim race. I hadn’t done an open water swim since Blue Lake Tri in 2008, when I panicked and had difficulty just getting through it. I recall sitting up and treading water, my breath fast and ragged, waiting for everyone to swim by me so I could begin with the tangle of arms and feet around me.

The beginning of the race was a blur; I pulled my wet suit on, jumped in the water, and the race began within minutes. I went out too fast and within a minute or two, I got panicked again. I had to sit up because I was so dizzy I could barely decipher sky from water. Afraid I would have to summon a kayaker, I let the waves pull me away from the course as I settled my breathing.

Eventually, I continued on, slowly at first. At some point I found my stride, but I kept forgetting to sight and would end up widely off course. Rookie move. 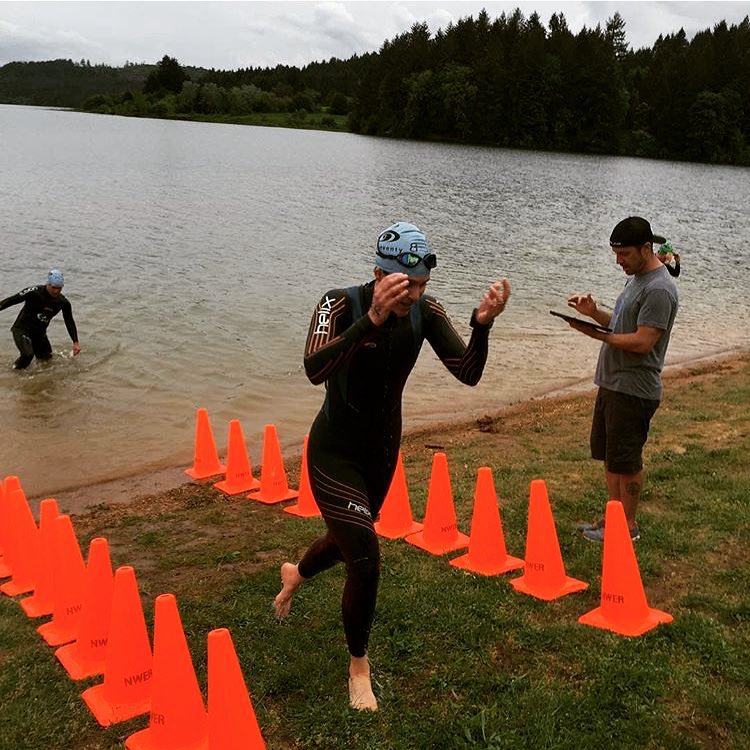 Running to the finish

I hoped this race was enough to exorcise my open water demons, since I wouldn’t get another chance to get in the water. I gave up any ideas I had about swimming fast and focused entirely on just getting through. Smooth is fast was my motto for the day. Although once on the bike I decided it was kill everyone, although probably that is not exactly a good sportsmanship-type thing to be thinking.

When we dropped off the bikes the day before, the wind was insane and it started raining as we were returning to the car. The forecast had gone back and forth between rain and dry weather; I prayed for warm temps since I planned on wearing just my racing kit.

We woke up at 4am, choked down breakfast, and I did a few stretches before heading out. The only thing I was nervous about that whole bus ride to the reservoir was the swim. I took some anti-motion sickness pills before getting on the bus with the intention of taking another right before the race, hoping that would quell my dizziness. So I put the foil square safely in my bra. “That looks like it could cut you” DJ said. “Well I’m going to take it beforehand” I said. Yep. 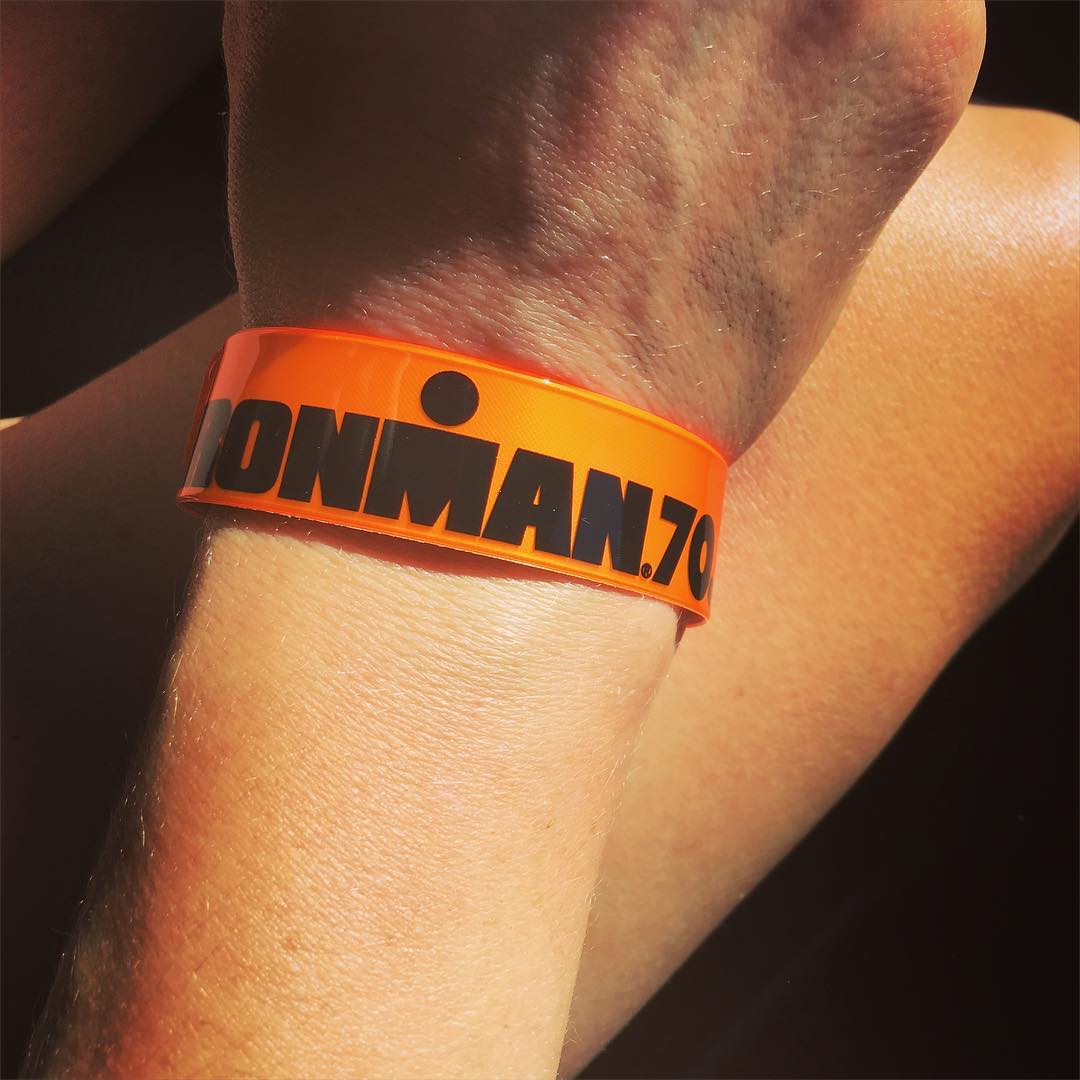 Got to wear this for 3 days

The clouds were ominous and the air was cold, but it wasn’t raining. My wave was the 4th or 5th to start; DJ stood with me before we began slowly filing down the dock. I stood in the back, nervous. When it was finally our turn to get in the water, the chill of the water on my feet, hands and face took my breath away. It seemed we were only in it for a moment before the gun went off. Smooth is fast I told myself.

Unfortunately, the cold plus race nerves shot my heart rate way up and I had to sit up almost immediately. The world turned sideways. At least I was prepared for the panic this time; I tread water and just tried not to drift away. I took a few strokes, sat up, took a few strokes, sat up. It probably took 2 or 3 minutes before I was fully swimming. After I started getting myself sorted, I remembered about the motion sickness pill, still safely in my bra, held tight to my chest under my wetsuit.

I didn’t swim hard, and I was again doing a poor job of sighting. I definitely ended up with some extra yardage, according to my Garmin.

I had stashed arm coolers, gloves and a vest in my bag; I didn’t care how long it might take for me to pull on extra clothes, I would rather be comfortable then cramped up from cold. And I am so happy I did this; it ended up being about 46 degrees and raining on the bike course. There were many long descents and the vest absolutely saved me. Despite race brain, I managed to remember to pull the pill out of my bra at transition, still safely nestled where I left it, no damage done.

My legs were freezing from the cold, and I found it impossible to hit my target heart rate without trashing them. So I was about 5 beats lower then I intended. Even so, I passed gobs of people on every climb as well as the descents. I ended the swim in 56th place, and ended the bike in 25th place. I can only imagine if I’d had a TT bike.

When I finally got to transition, my hands were so cold I couldn’t unbuckle my helmet; I had to switch shoes first and then come back to it. Once off, I couldn’t get my visor on, my hands absolutely refusing to sort out the strip of velcro. I left it behind and began a slow jog out of transition to warm up.

I walked nearly every climb, playing it safe. I hadn’t done a run longer then 10 miles, and I was nervous about my knee (and hips and calves, etc). The run seemed to last forever. The plan was to conserve, conserve, conserve until the last 4 miles, and that is exactly what I did. I could barely take in nutrition and got maybe two mouthfuls of goo down, but my stomach instantly got a side stitch any time I took in liquid.

The course bends back on itself many times, giving everyone the opportunity to see other racers on the course multiple times. DJ started the race about 30 minutes behind me and had every intention of catching me. Somewhere around mile 6 or 7 I finally saw him, a mile or two behind me. It was thrilling and lifted me to see friends out on the course. I also doubled my efforts to make sure he would not catch me.

Finally I crested the last climb and turned it on. Race like hell, that was the plan. I opened it up, ignored my body, and ran as hard as I thought I could hold for 3 or 4 miles, which turned out to be 7:30s. I felt like I was flying.

There was someone in my age group ahead of me, I caught her and held her pace for a mile or so. I was struggling but I forced myself to stay with it. This part was so fun, it really felt like racing. Unfortunately, I thought the red bull arch was the finish and I sprinted for it; I realized my mistake so I slowed back down, but caught me and passed me at the line. I congratulated her and she said she didn’t think there was a chance in hell she could catch me when I flew by her. So it goes.

I ended up in 25th place, which was not the top 20 I was hoping for, but a solid finish for a first timer, and a race I feel proud of.

The week after we got back, I went back to the open water swim series to give it another go. I’ve already registered for the Coeur d’Alene 70.3 in late June, so I had to get this demon out of me. We were early, so we decided to do both races. More chances for me to get my shit figured out.

The water was very choppy, it was windy and we didn’t really have time to warm up. And yet… and yet off I went. No problems. I didn’t sit up once. I finished the 750 strong, and the 1500 even stronger. And I had fun. I loved it. While racing I noticed how beautiful the sky was and how glorious it was to swim without hitting a wall every 25 yards.

After the final night of racing, and again no issues at all, I ended up in 16th place for the series in the 1500. I can honestly say I’m looking forward to the swim at CDA and seeing what I’m really capable of.

On a final note, none of this would be possible were it not for my coach, training partner and best friend DJ. I can honestly say I would never have done any of this without him, and I certainly would not be as strong without his guidance and support. And perhaps more importantly, I am having an absolute blast with training and racing and am looking forward to killing everyone at Coeur d’Alene. 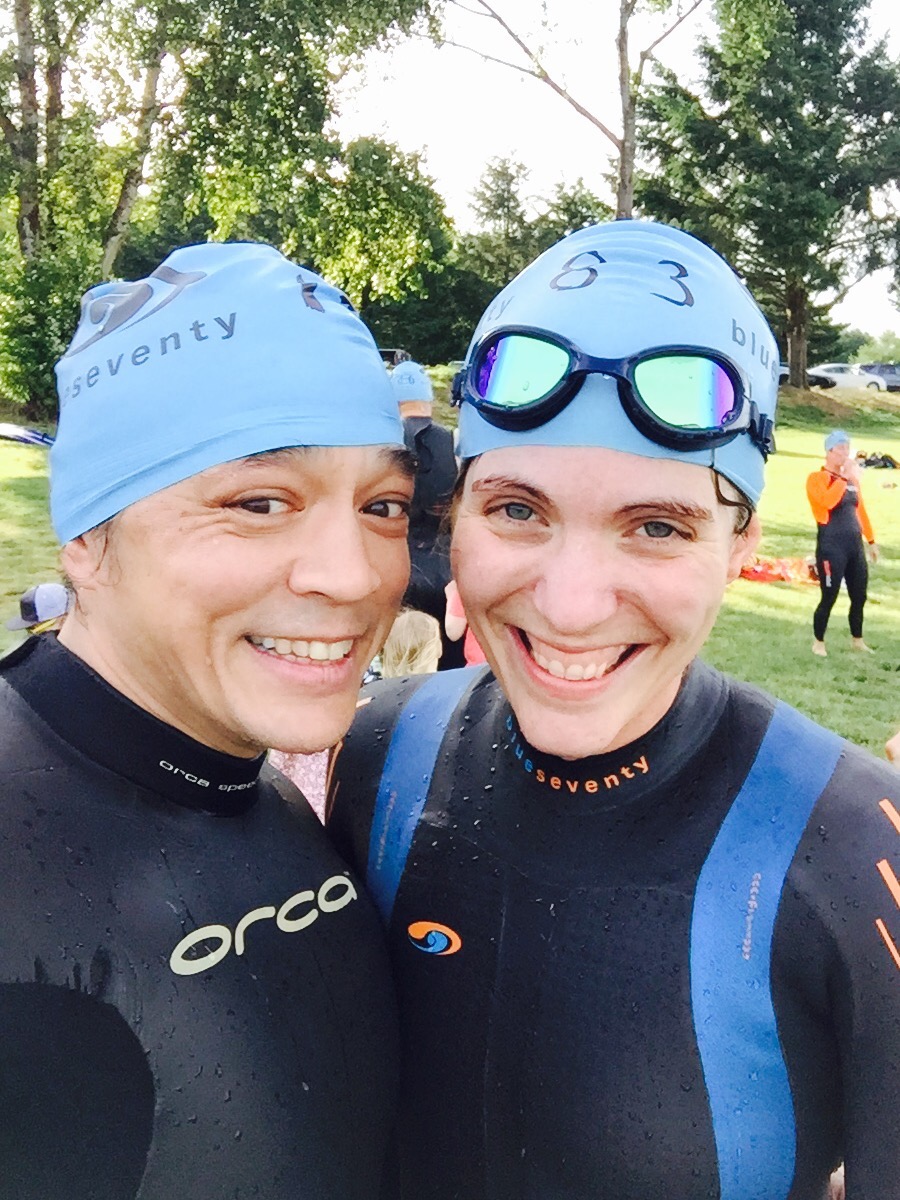 At the end of my second swim series race