Two and a half years ago I raced the High Cascades 100, a 100 mile mountain bike race around Bend, Oregon. In typical Kristin fashion, I raced without a Garmin, without a bike computer, without even so much as a watch. I hardly looked at the course map or elevation profile (I dunno, we climb up Mount Bachelor a few times, whatevs). Unsurprisingly, around what was probably mile 40 I thought I was like 80% of the way through. So I went into some dark places later in the race.

Obviously I do not recommend this approach. However, I probably raced faster then I otherwise would have, since I thought I was almost done for about 70% of the race. The side effect of that in such a long race was that I completely blew up around mile 80 and hung out at an aid station for 40 minutes. But I most certainly pushed myself harder then I ever had before.

Yesterday I had a set 20×50 in the pool, with 10s rest. The only thing DJ wrote down was “steady”. Okay, so just keep a solid, consistent pace, got it. I figured 1:40/100 pace would be a bit of a challenge, but not race-pace. Since I’m bad at math and I was doing 50s not 100s, I decided I would look at the pace screen on my watch after the first lap, see how many seconds that was, and then just do that the rest of the time (the pace disappears once you hit the lap button so you have to look really quickly).

So I did a lap, and thought I saw 1:40 pace. Did I mention the numbers are really small? I guess you see what you want to see. Anyway, okay I thought, I just have to keep it around that many seconds per lap. Ha! 6 laps in and I was already breathing heavily. 10 laps in and I wondered how I would survive. 15 laps in and I thought “there is no way I can keep this up”. But every time, as I hit lap and dove back in, I thought to myself: Just do one more. 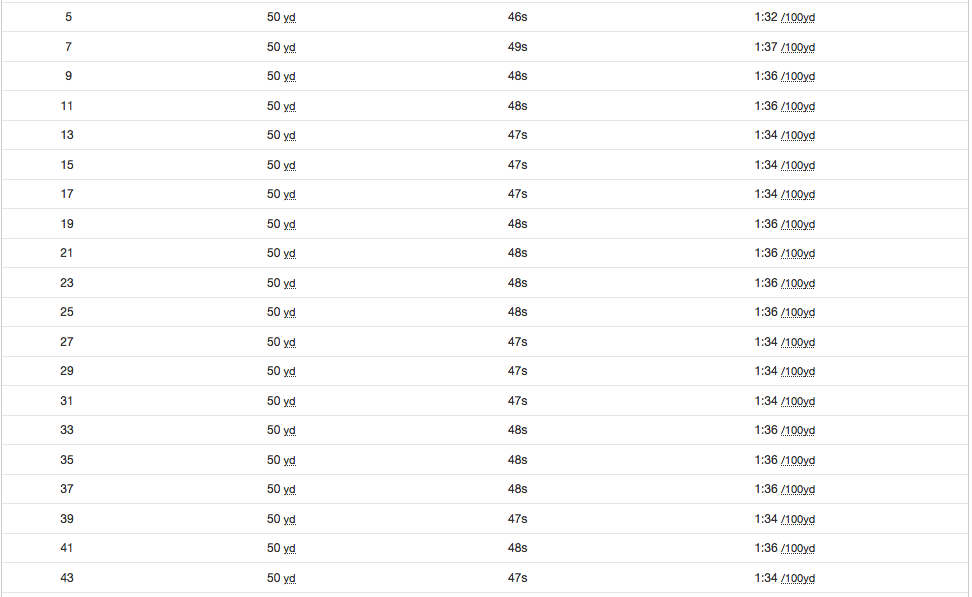 Sometimes holding myself back would be the smart thing (like pacing during a 12 hour effort perhaps…). But during weekday workouts? You don’t always want to push yourself to the brink of exhaustion, but when you’re supposed to go hard, it’s easy to think “well, I did x last time, so I can maybe do slightly better then that”. Hey maybe you can do way better then that. Who knows? If you pace yourself too much all the time, you’ll never break down the walls.