What I hate about training

I took a long hiatus from training. Before I broke my back mountain biking in 2010, I trained a lot. I woke up at 5:30am to do hill repeats. I avoided traveling or any weekend activities that would interfere with the hours upon hours of riding I did. I perhaps over-trained as a cyclist, and I definitely over-trained as a triathlete.

It certainly paid off: I went from complete beginner to Cat 1 in two years. I won some races. I actually won the only 2 triathlons I did (okay so maybe my field was tiny, but details). 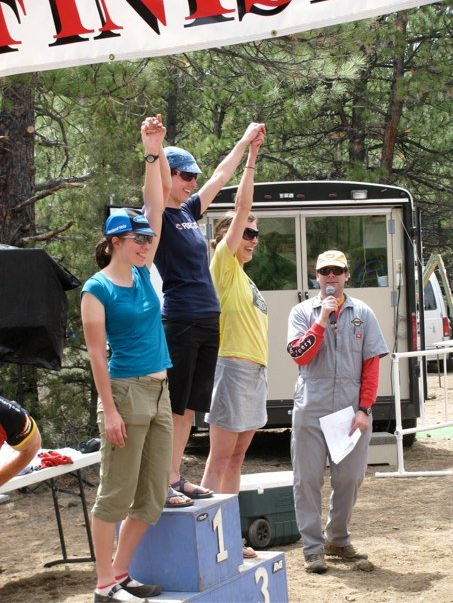 This used to be a common occurrence. Chainbreaker, 2009

But the pressure I put on myself was high, and I was pissed off when I didn’t do well. Emotions were high around racing; on one hand I loved it, but on the other hand it was intensely stressful, and I would either end the day on cloud nine or kicking myself all the way home.

Breaking my back brought that all to a crashing halt. I was poised to win the cat 1 MTB Cross Country series (I was in 2nd with a number of races to go). Then I got a little too confident, went off a jump with a poor landing, and goodbye season.

I did get back on my bike about 4 weeks before I was supposed to, but it was purely casual. Okay maybe I did still go up and ride the bomber trail down from Timberline about 10 weeks after the crash, but I was with my PT so certainly that makes it okay? Anyway.

After that, I haven’t committed myself to training very hard. I have pretty much half-assed every single season. I keep saying “but this time I’m really going to train” and then not really training. Then I show up to a race, don’t do well, and hate myself for it. Because that makes a lot of sense.

The truth here is complex. If I truly commit to training, I fear going down that tunnel of 5:30am wake up calls. I don’t want to feel guilty for going on non-bike vacations. I don’t want to get upset when I have to take a day or two off. But most especially, I fear sinking my entire self-worth into a race or two and then not doing well. Maybe I get sick, maybe I crash, or maybe I’m just not as good as I thought I could be.

But that’s what risk is, right? Making the commitment, putting in the time, putting in the work, and then going for it. If it doesn’t work out, I just have to shake it off and keep going. It’s a life lesson I need to keep re-learning, whether it’s about racing or business or creative projects or learning new things. I can’t win everything—but I can certainly try.

This year, the goal for me to is to learn balance. To both train hard, fully commit, but continue to have fun with it and not take things too seriously. A big part of that is having a coach telling me to back off and looking out for signs of over-training. I want to have fun on my bike, so maybe sometimes that means the workout is compromised and I go out and enjoy some gravel grinding. So be it.