What an adventure! I must say, I find it hilarious that I did a 24 hour swim relay (which I’ve never heard of), before a 24 hour mountain bike race (which are quite common). I never thought I would do an overnight event, but with a little peer pressure and a whole lot of FOMO, I guess I’ll do anything!

Warning: this is a long one!

Our team had something like 10 swimmers, such that our turns took 6 hours. My swims were scheduled for 11:30am/pm and 5:30pm/am. The whole thing went from Saturday at 9am to Sunday 9am, the only rule that every team has to have at least one swimmer ankle deep in the water at all times during those hours.

This wasn’t a race, no one kept track of anything except who was in the water at any given moment. We launched our swims from the beach between the SERC (South End Rowing Club) and Dolphin boat ramps, and (mostly) kept within the bounds of the aquatic park which was well sheltered from the bay. Which was a good thing since we had high wind and flash flood warnings on the docket!

The morning turned out to be quite nice, and I managed to take a few photos during the sunniest part of the day. 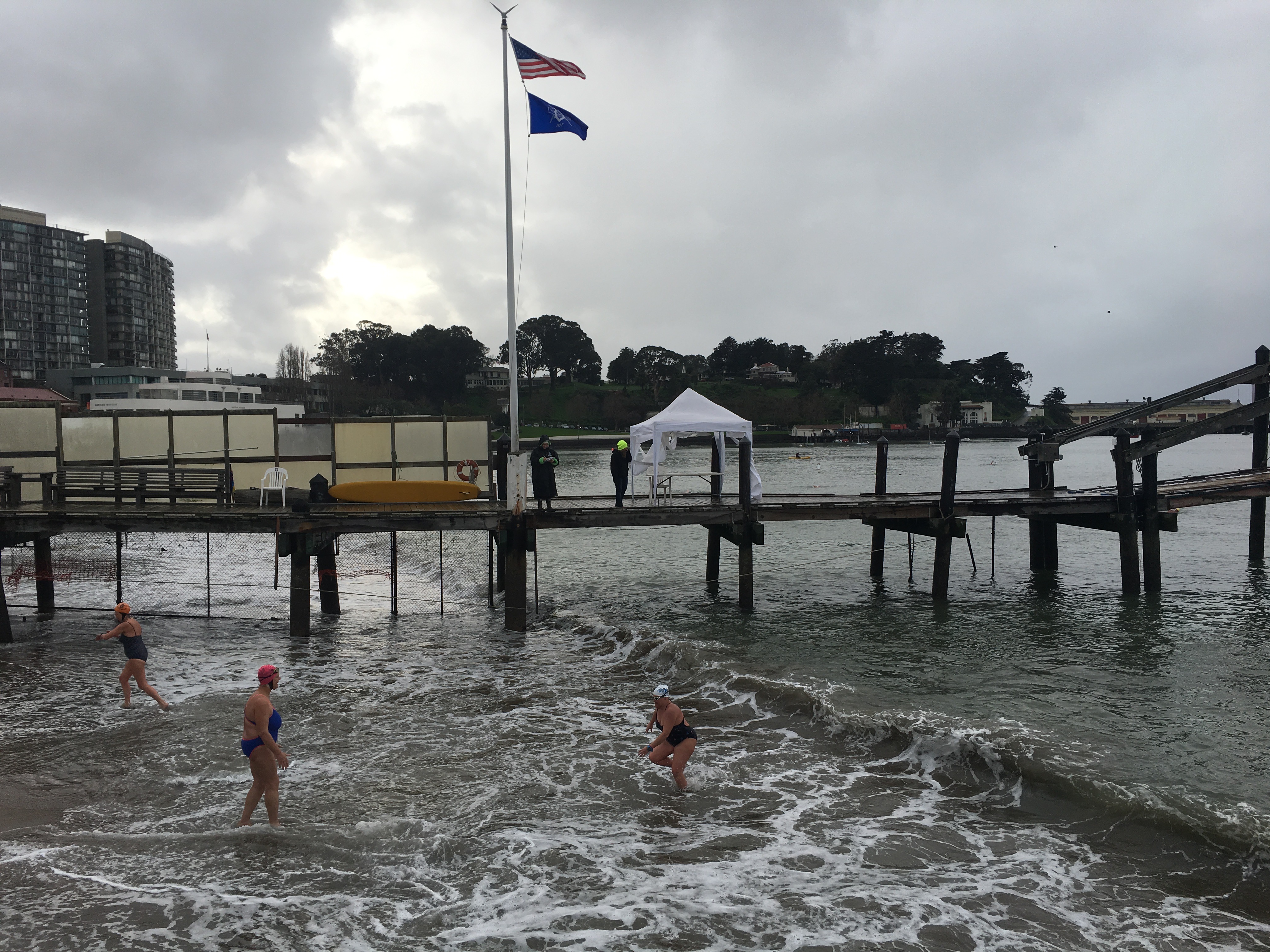 First swim (11:30am): You’d think by now that I would have no trouble getting into cold water, but it still sucks. I donned my blue/green glittery eye makeup and Ice Wolf suit (as that is now my official nick name), and tried to shake out the nerves as I started my lap. I noticed quickly there was a swimmer next to me, and for some reason I just thought it was some rando person being weirdly close to me (I guess I’m used to triathletes…lol). Turns out it was Cindy, and she showed me around the place. It was nice to swim a lap with someone, and it ended up being my only shared lap. For some reason I tend not to want to swim with others, I think it’s mostly my uncertainty about my own abilities as a swimmer.

Second Swim (5:30pm): This was my hardest swim, and I heard it was for some others too. When I started it was still light out, but it was pitch black by the end. The weather had been whipped up in the afternoon and the waves crashing on to shore were very large, which usually makes me nervous anyway. Swimming in the dark with huge waves wasn’t sounding like the best idea. But off I went, and at first it was fine. It actually felt quite lonely on my lap, I hardly saw anyone. I think some swimmers may have already been just swimming the buoy line (the night course), but I decided to swim the whole park, since the rest of my swims would be in the dark. All was good until I got to the opening of the park.

The water seemed very turbulent, and I had the sensation that I was being pulled out of the park. I immediately felt afraid that I was going to get sucked out in the bay. I began sprinting toward what I thought was the dock (it was hard to see in the dark with scratched up lenses and poor night vision). I was swimming alongside large ships that were chilling in the water, and it seemed like I wasn’t making any progress next to them. I was screaming in my head, GO!

Finally I noticed I was half way down the length of the boat and making solid headway. I slowed down and talked myself off the ledge. With all that sprinting, I was about 8 minutes early to the dock, so I had to kill time. I floated on my back a little, took some strokes this way and that, and unfortunately, 8 minutes of no real effort in the water meant my body temperature took a nose dive. I was shaking when I got out of the water.

Thankfully we could use the sauna at SERC so I spent quite a while shaking in there trying to rewarm.

My eat/sleep strategy: I think this whole thing went smoothly for me because of my recovery strategy. It started the day before with a long nap and plenty of sleep 2 nights in a row. During the event, I tried to stick with foods which were easily digestible (many, many bananas were eaten), and not to eat very much in any one sitting. So it went something like this: eat 1 hour prior to swim, swim, rewarm, eat again, sleep 2 hours, wake up 2 hours before next swim to help out other swimmers and repeat. So I slept after my second swim and third swims, with some general “rest” time after my first swim, which turned out to be enough. I wasn’t actually very tired the next day, strangely.

Third Swim (11:30pm): I had heard the third swim was the hardest, but I felt a bit better knowing it would just be the buoy line. Also the wind and rain had died down and the surf had lessoned a bit. Cindy asked me what my strategy was, and I said “swim for 30 minutes?”. I was mostly just trying not to think about it, and not to pause like I had during my second swim.

I thought I would see a lot of swimmers, but I didn’t. I think many of them were out swimming to the opening and back. I could see the light on the kayak at the end of the line, which was excellent to sight off of. This swim went fairly smoothly, and again I had to do a lot of small back and forths so I would be right at 30 minutes.

Fourth Swim (5:30am): I was excited for this one, happy to only have to brace against the cold one last time. I also had a routine down and felt like I knew what I was doing. I enjoyed helping my team mates to and from the water, and overall the weather turned out to be much better then I expected.

This swim, still totally in the dark, felt much like the previous one. Toward the end, I made myself stop and float on my back, with my buoy like a pillow, and just admire the view of the Ghirardelli sign, lit up against the city.

After I warmed up from this last swim, I took an actual shower and changed into clean clothes. I watched the last few swimmers get in the water, and a few people jumped in with Tracy for the final leg of the swim. In retrospect, I wish I had done it too, because honestly I was craving more cold water! I felt like I had more to give, which is the best way to end such an event.

I am so thankful to the event organizer, Suzie, to my team mates and everyone involved. The swimming community is one I’m just getting to know, and I’m really liking what I’m seeing so far! 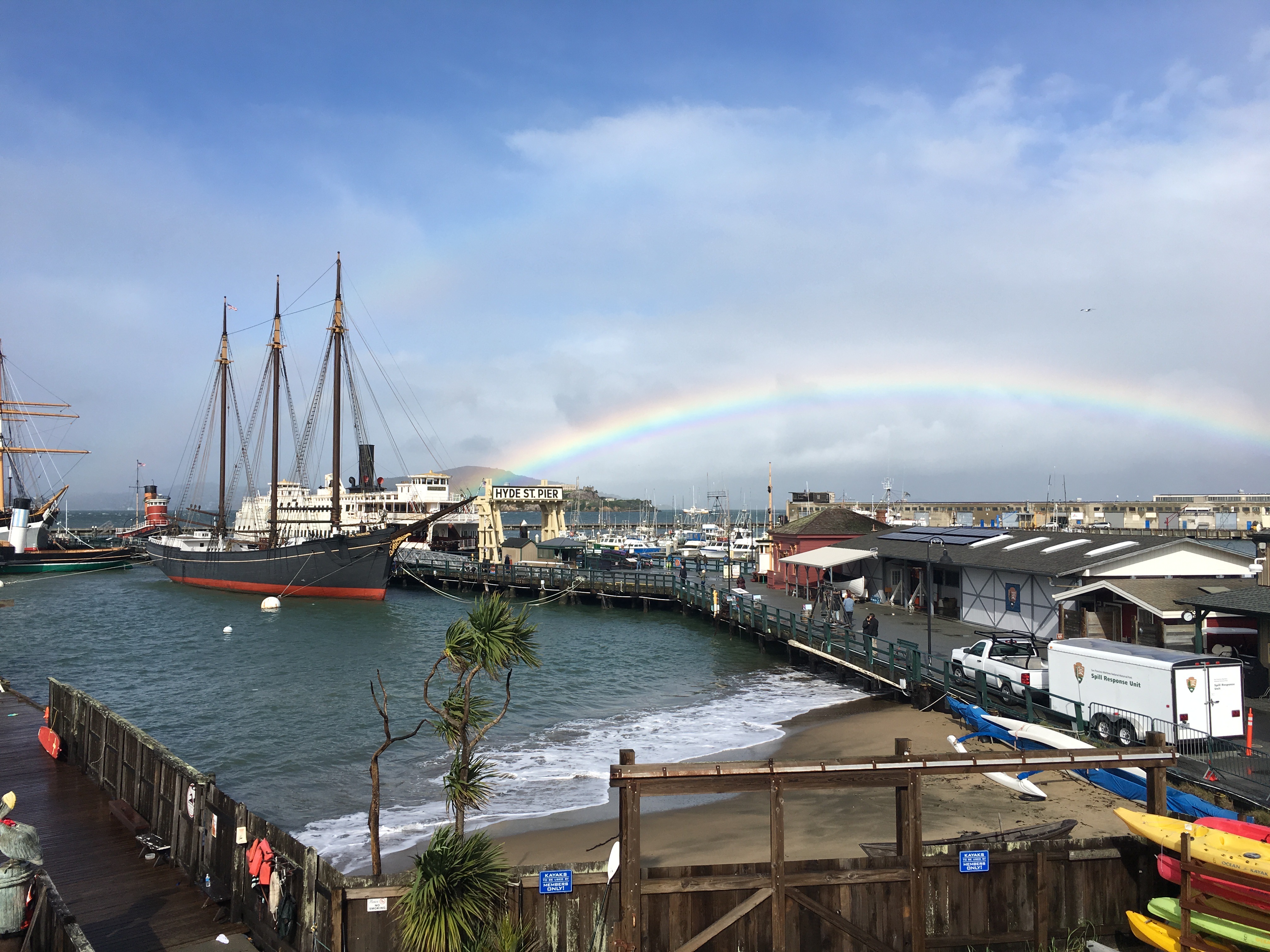